When to Call an Emergency Plumber in Phoenix? It’s always best to find a plumber close to your home or place of business before an issue develops. You don’t want to risk letting the problem go until it’s too late. You might even be surprised to know that some plumbing businesses are available 24 hours a day. The first step to finding a plumber near you is to call the business’s office and find out where it’s located.

Signs of a clogged drain

There are certain indications of a clogged drain that warrant the help of a plumber. One of the most obvious signs is a drain that has a foul odor. This smell can vary depending on the substance blocking the drain, but it is usually not pleasant. Often times, this odor is caused by debris and organic matter that has been clogged in the drain. It may be tempting to run water through the pipe to eliminate the smell, but this could lead to further blockages and possibly even damage to your pipes.

Slow drains are another sign that a drain is clogged. Often, this is caused by hair and other household items clogging the drain. It can also be caused by a clogged main line. Whether you’re experiencing a slow drain or a sewer backup, a plumber can safely and efficiently unclog it.

Signs of a frozen pipe

If your home’s pipes are dripping or leaking, there’s a good chance that one or more have become frozen. This is especially common in the winter. It’s important to keep an eye on daily forecasts and talk with a plumber about smart fixes for the problem. One of the most common signs of a frozen pipe is a trickle or a standstill when you turn on the faucet. If you have a frozen pipe, you may need a plumber immediately to prevent the pipes from bursting.

Another sign of a frozen pipe is an unusual smell coming from the pipes. This smell is only emitted from the faucet or the drain, so it’s likely to be coming from a frozen pipe. In colder climates, the ground can also freeze, causing drain lines to freeze and sewage to accumulate in the pipes.

Signs of a slow but steady leak

A slow but steady leak can be caused by cracked piping or an improperly installed fixture. Having a professional inspect the system is important because even a small leak can lead to a bigger problem in the future. By calling a plumber, you can prevent the damage and avoid paying an exorbitant amount for repairs. In addition, having your water heater repaired is one of the easiest ways to protect your home at an affordable price.

Time to call a plumber

A plumbing leak can be an annoyance. Although a simple repair may be doable, you may wish to delay calling a plumber until a better time. Winter months are the busiest times for plumbers. This is because water in pipes freezes and causes a blockage, which may result in a burst pipe.

Some common signs that it is time to call a plumber include low water pressure, sewage smell, and a blocked pipe. In some cases, plumbing problems may be causing an odor that can be difficult to detect with a plunger.

If you need an emergency Plumber in Phoenix contact our plumbers at Ben Franklin Plumbing AZ for help.

We are the Phoenix Plumber & Plumbers Near Me. Our Plumbers in Phoenix AZ have 5 star verified reviews provide same day service and get the job down in a timely manner.

From Garbage Disposals, Gas line, and tankless water heater services to the kitchen sink our family owned plumbing company has the best plumbers. Many customers have said they received great advice and gave a top notch overall rating for our top plumbers in Phoenix AZ. 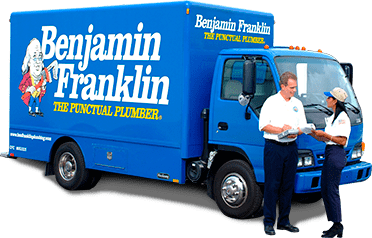 What Our Customers Are Saying… They were at my house within two hours of placing my call, diagnosed the problem and fixed everything within an hour. Both plumbers were exceptionally polite and mindful of keeping everything neat and tidy. I had out of town guests at the house who commented on how quiet and efficient the plumbers were.
Mary I.Glendale
Great service all around from very professional plumbers. Not pushy and gave me all the info I was looking for and some I had no idea I should be asking about....Hopefully, I don't need any services again soon but if I do, I'll be calling them again.
Joe G.Goodyear
Love these guys. We bought an older home and knew we'd be in for some plumbing issues. We've had Ben Franklin out several times over the past few years for various issues and have always been impressed with their technicians. They're friendly and always go above and beyond to keep the house clean and leave everything better than when they came.
L.C.Phoenix, AZ